It’s plugged as being the solution to our climate woes; nuclear power plants produce far less greenhouse gas emissions than coal-fired power plants, and they can produce a high amount of energy. But are any potential benefits of nuclear worth the risk of the unpredictable misuse of uranium?

Go ahead and call us ‘thought-nerds’, but we think it’s fascinating that different people come to different viewpoints on ethical matters.

In most cases, differences of opinion do not arise because of any fundamental disagreement about whether people, animals, and the environment are important. Rather, we find that people strike different levels of balance between the competing interests of those things; or they assess the risk of harm to those things differently.

Some ethical issues are more divisive and complex than others – and a topic that’s sure to encourage heated debate is that of nuclear energy. It’s a topic we’re regularly challenged to revisit by some of our investors, yet each time that we do, it just becomes clearer that any benefits just aren’t worth the risk of the unpredictable misuse of uranium.

It’s plugged as being the solution to our climate woes; nuclear power plants produce far less greenhouse gas emissions than coal-fired power plants, and they can produce a high amount of energy.

The evidence is clear that to limit dangerous global warming, there’s an urgent need to move away from coal power without delay to reduce greenhouse gas emissions. However, in the case of nuclear energy, we won’t invest in the sector because there are serious concerns about its safety – a particularly salient consideration given the availability of efficient, safe renewable energy alternatives.

Three major areas of concern that outweigh the potential benefits of nuclear energy as a low carbon source of energy to help address global warming are:

Concern #1: The risk of catastrophic failure of nuclear power stations.

Concern #3: The potential for misappropriation of nuclear technologies and materials for weapons manufacture.

The first two points have fairly well established arguments – and high-profile issues and catastrophes easily illustrate the risks. You can Google at your leisure Fukushima, Cochabamba (where radioactive materials were transported on a public bus, harming some passengers with radiation), Chernobyl, and Ranger Uranium Mine.

Does the threat of weapons manufacture matter?

To answer this, the question is not whether it is likely that the world faces a clear and present danger of nuclear conflict or terrorism (i.e. whether there are “rogue” states or other groups currently acquiring nuclear weapons technology). Our argument is that, applying normal risk analysis principles, the impact of this risk occurring is too high and will only be increased with further development of nuclear power and other nuclear technologies. If a risk has a high impact, it’s worth worrying about, even if the likelihood of it happening is low.

No one can be certain of the geo-political situation in the future and the continued increase in global nuclear capability only increases the risk of the ultimate catastrophic use of nuclear weaponry.

One of the ways we assess risk is to apply what’s known as a ‘risk matrix’. In the case of nuclear investment, we find the risks too great. There’s a simplified version of a nuclear energy risk matrix further below, but more complicated matrices are often used by companies in important decision making – for example to estimate the appropriate type and level of insurance required for individuals.

Is a 100% renewable future really possible?

Given the urgency of the global warming threat, it’s important to pursue a diversity of interconnected renewable energy sources, and energy storage solutions. A mix of 100% renewables – including solar, small-scale hydro, tidal, and wind power – are already providing reliable base-load energy in places like Costa Rica, Denmark, Germany, and Spain. Beyond Zero Emissions has assessed that Australia could be 100% renewable in less than 10 years – if the political will existed.

What about the nuclear deterrent?

At Australian Ethical, we won’t invest in nuclear or other weapons, but some will argue that having nuclear weapons deters others from starting a nuclear conflict. We don’t buy this. Deterrence won’t stop accidental detonation or launch, it works less well in crisis situations and it often won’t work at all for “rogue” states and other groups who are prepared to act with little regard to the risk of retaliation. 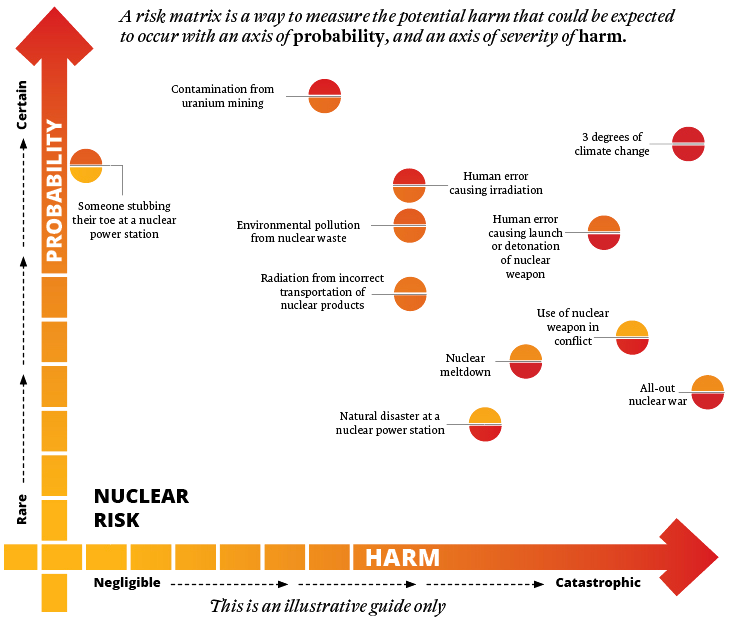 While many will argue about the placement of scenarios on the above matrix, it’s clear that there’s no nuclear risk that can be considered trivial (we don’t consider toe-stubbing a genuine harm). Most, if not all of the risks with nuclear, are highly catastrophic or critical. You’d be hard-pressed to find someone comfortable with a worst-case scenario such as all-out nuclear war! And, as well as causing direct harm, nuclear catastrophes would obstruct our other efforts to reduce carbon emissions.

What about the risk of catastrophic climate change? We’ve included that as high probability and high harm, based on the fact that governments’ published intended emission reductions (their ‘INDCs’) will only limit warming to 2.7 degrees.

So what to conclude from the matrix? Firstly, we must act urgently to reduce greenhouse gas emissions faster to reduce the level of global warming. Secondly, attempts to do this by increasing nuclear power will increase the risk of nuclear conflict. Since we are able to reduce warming by increasing non-nuclear zero emissions sources of power (i.e. renewables with energy storage), we should concentrate on those alternatives. Bottom line: any small additional benefit we might derive in climate risk reduction from more nuclear power is far outweighed by the greater risk of harm created by increased nuclear power.

It took 21 years to finally reach a global climate deal at COP21 in Paris. At this time in history, we believe there’s no value in putting the planet and ourselves at risk of a completely preventable catastrophe. Renewable technology is now in the strongest-growth position it’s ever been – let’s not throw away the chance to get it right.