Your guide to renewable energy

Wind, solar, hydro and geothermal: They’ve all been touted as the answer to our climate woes. But how much do you actually know about renewables and how they work? Here’s an intro to everything you ever wanted to know about the different types of renewable energy.

The glory days for coal are over.

Renewables are also more efficient than ever before. The largest coal-fired power stations in Australia, the Eraring power station near Newcastle, produces enough electricity to power about two million homes – but it produces tonnes of harmful CO2 in the process. By contrast, a mix of renewables and battery storage can produce the same amount of electricity and be ‘carbon-neutral’ after only a few years.

Renewables could contribute to 45% of Australia’s energy generation by 2030 and over 94% by 2050, says research from Bloomberg New Energy Finance in June this year. And the Australian Energy Market Operator expects that 30% of coal-fired power plants will be replaced with renewables by 2038.

So it’s time to say goodbye to coal and carbon dioxide and hello to the future with these impressive renewables.

How wind power works: Wind turbines have two or three propeller-like blades connected to a rotor which then joins up to a generator to create electricity. Needing nothing more than a gentle breeze of two to five metres a second to work, wind turbines are a reliable source of power as they can create energy about 70-80% of the time.

As sure as the sun (and hot air) will rise, there will always be a gentle wind to power wind turbines. This is because with the transition between day and night the air above land heats up and cools down quite quickly, and heavier cooler air rushes in to take the place of the rising hot air. Turbines are usually placed in a location where this gentle heating and cooling of air is most reliable.

One thing you rarely hear about with wind turbines is what’s in the middle of the big metal pole they stand on. You might be interested to know that it’s just a hollow tube with a stairwell. The towers are so high because wind speed increases with distance from the ground, so the higher the tower, the better the potential to capture energy and generate electricity.

How much energy can wind turbines produce? Most land-based turbines operate with a capacity of between two and three megawatts – enough to supply about 1,500 standard homes with electricity. Bear in mind that this is just for one turbine on its own – most turbines are grouped together on a wind farm, and of course a whole farm generates much more energy. For example, the Macarthur wind farm in Victoria, which was built by Meridian Energy (a company we invest in), generates enough electricity to power 154,000 homes.

We recognise that resources are needed to manufacture wind turbines, but a 2014 study by the Intergovernmental Panel on Climate Change (IPCC) found that turbines are usually the least emissions-intensive form of electricity available and that most of the time they can ‘pay themselves off’ environmentally after just three years of use.

How we’ve invested in wind: We’ve found wind energy to be a profitable investment through a number of companies, such as wind turbine manufacturer Vestas and Infigen, one of Australia’s largest publicly listed owners of wind farms.

How solar power works: When sunlight hits a solar panel, the energy from the heat of the sun is absorbed into photovoltaic cells. These cells change the energy into direct current (DC), which is converted to alternating current (AC) that can be used for electricity. DC is battery power and it works like water moving one way through a hose where electricity is only sent in one direction – whereas the AC power that comes out of a power point sends the same electricity back and forth very fast so it’s more efficient and can be transported long distances. Solar panels can’t produce power at night – they need sunlight to work.

Solar is incredibly easy to set up – even in small spaces – and it’s very low maintenance, making it a popular and versatile choice. In fact, the International Energy Agency released a report in 2017 that solar has become the fastest-growing power source in the world.

How much energy can solar panels produce? There are many different types and sizes of solar panels, so it’s not really possible to give a clear-cut quantity on this. The more panels there are the more electricity can be produced – and when combined with batteries, the potential is limitless.

In 2017, just over a fifth of Australia’s renewable energy came from rooftop solar on our own homes – but where there’s the biggest potential for impact is with large-scale solar farms that can feed reliable energy into the grid on a regular basis.

We recognise that energy and resources are needed to manufacture solar panels, but a 2018 study by the Fraunhofer Institute for Solar Energy Systems found the efficiency of photovoltaic cells is increasing all the time.

How we’ve invested in solar: We’ve invested in lots of profitable solar companies. For example, there’s First Solar, a solar power station builder, operator and a manufacturer renowned for their affordable, efficient panels. Their Nyngan and Broken Hill solar farms in NSW were the first utility-scale solar projects in Australia. We also love that they offer panel recycling at the end of their panels’ 25+ year lives. They can recover up to 90% of the materials from old panels to make new ones.

How hydro power works: When lots of water is stored in a reservoir, it will fall with a lot of force into a lower basin thanks to good ol’ gravity. Water is stored in a high location and allowed to fall down through a turbine to create energy.

Also, one of the best ways currently available to store large amounts of energy is by storing water in dams. When energy is needed, water can be released.

How much energy can hydro produce? Hydro is one of the most efficient ways to generate power. Up to 90% of the energy available can be converted to electricity – in comparison even the most efficient coal-fired power plants only run at about 50% of their potential efficiency.

In 2017, hydro was the largest contributor to renewable energy generation in Australia at 40% of the total renewable energy made that year. And in good news, research shows that there’s very little water lost, evaporated or wasted when electricity is created this way.

How we’ve invested in hydro: While there can be some negative impacts on the environment from building dams, we only invest in ‘run-of-the-river hydro’. Run-of-the-river hydro means that the natural flow of the river is not disrupted. We also don’t believe dams should be built in areas that disrupt communities – either when they are built or afterwards. The Hume and Burrinjuck dams (that we invest in through Meridian) are run-of-the-river hydro stations that generate enough renewable energy to power about 56,000 homes in NSW. In total, all of Meridian’s hydro stations generate enough electricity to power about 1.4 million homes a year.

Meridian own and operate the Hume Dam in NSW. Source: DJDunsie via Creative Commons.

How geothermal works: Geothermal creates less than 5% of the greenhouse gases of coal-fired power plants. There are two ways to capture geothermal energy from the Earth’s naturally-heated core temperatures. The method used to create grid electricity is pushing steam created by the Earth’s heat through loops of underground pipes, which are then pushed through a turbine at high pressure to make power. There is another type of geothermal energy that provides heating and cooling for buildings by simply piping warm air or water closer to the structure that you want to regulate. All geothermal only really works in areas where heat from the Earth’s core comes close to the surface – so near locations that have hot springs, or even volcanic and seismic activity.

How much energy can geothermal produce? Only 0.6% of the world’s renewables are geothermal, but it’s estimated that only 6.9% of its global potential has been tapped so far. The Intergovernmental Panel on Climate Change (IPCC) has said that the power potential of geothermal is in the range of 35 gigawatts to 2 terawatts, which is the equivalent of powering up to 2.5 billion homes.

How we’ve invested in geothermal: We invest in Ormat who are involved in all aspects of geothermal energy – from exploring, designing, developing, building, owning and operating geothermal power plants all around the globe. 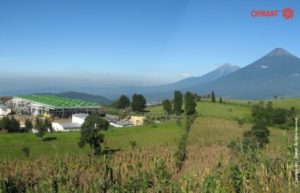 Ormat own and operate geothermal stations all around the globe. This is a 20MW station in Guatemala, a country where nearly 60% of energy comes from renewables. Source: Ormat 2007.

Although not considered ‘renewables’ as such, batteries are a crucial component of the renewable energy mix. Renewables generate power when the natural elements allow it – such wind, sun, or rainfall – so renewables only operate at certain times and it’s unlikely to correspond with times of peak electricity use. A fossil-fuel powered plant can create energy when it’s needed to supply peak demands. But by using high storage batteries to stockpile the energy created from renewables, clean electricity can still be used when it’s needed most.

In 2014 the world’s first utility scale battery was connected to the grid in Germany and has supported a reliable supply of renewable energy ever since. Battery storage has also made it possible for islands like Ta’u in American Samoa to switch to being completely solar powered.

How we’ve invested in batteries: South Australia currently hosts the world’s biggest lithium ion battery, built by Tesla (who we invest in). This battery not only increases the security of energy supply, in its first quarter of operation it reduced the state’s cost of energy supply by $33 million.

Some people consider nuclear a renewable power source, but we don’t. True renewables are constantly being renewed by natural, harmless means – but the waste product left over from uranium mining and nuclear generation is potentially harmful to people, the planet and animals.

Why we won’t invest in nuclear: At this point, we’ve decided that nuclear energy isn’t safe enough for us to support. The three primary risks we’ve identified are the catastrophic failure of nuclear power stations, the challenges involved in safely mining uranium and the potential for misappropriation of nuclear technology in materials for weapons manufacture. We are also concerned about the difficulty of storing uranium and long-lived nuclear waste. Because we can reduce warming with non-nuclear zero-emissions sources (like renewables and energy storage), we’ll concentrate on those alternatives.

CLEAN ENERGY IS THE FUTURE

The facts show that globally, we no longer need to rely on fossil fuels. The time for clean energy is right now.

We believe in the power of society and the market to create much needed, positive change towards a better future. So now it’s just a matter of encouraging politicians and policy makers to catch up with the market and society.

Interconnected sources of generation from wind, solar, hydro, geothermal and other renewables combined with energy storage can produce reliable, cost-effective energy which doesn’t wreck the planet.

At Australian Ethical, we won’t invest in fossil fuel companies that generate income from coal, nuclear, oil and gas because we know it’s not the way forward. Instead, we invest in renewable energy, as well as energy efficiency and battery storage. Get competitive returns and help build a clean energy future by joining now.