Planting seeds of hope for women in northern Uganda 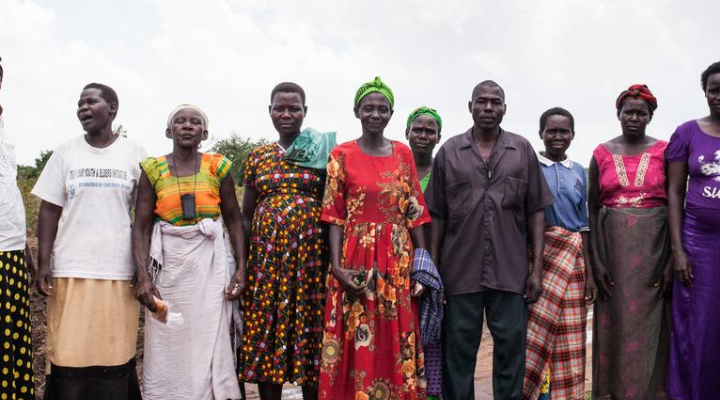 Food security in many countries can be challenging at the best of times, let alone in the middle of a global health pandemic. We caught up with Community Grant recipients Love Mercy to find out about how they’re helping female entrepreneurs in northern Uganda during the Covid-19 pandemic.

In May 2020 we received an email from the CEO of Love Mercy, Caitlin Barrett.

“Finally, after three weeks of going back and forth and making sure we had the correct government approvals and a solid health and safety plan in place, our seed distribution started yesterday! This included mandatory masks, hand washing stations, and pre-bagging all seed loans to limit person-to-person contact.”

Caitlin’s referring to the mammoth effort undertaken in a village in northern Uganda to plant seeds and sustain livelihoods in the face of global lockdowns and before the rainy season hits.

“The response from the women in the program has been quite overwhelming, with so many of them expressing their gratitude and saying that they had assumed the worst – that they would not get a seed loan this year and would be forced back into poverty and famine,” Caitlin wrote. “Thank you so much to Australian Ethical for being such a major part of pulling this off!! We really could not have done it without your flexibility in the grant funding for this year.”

Planting the seeds of gender equality and food security

This program is Love Mercy’s Cents for Seeds program, a microloan agriculture program that tackles gender inequality and food insecurity in northern Uganda. The program empowers women to become farmers and business women by providing them access to education, tools, seeds and training so they are equipped to feed not only their families and their communities, but potentially all of Uganda.

Since 2018 Love Mercy has been a recipient of an Australian Ethical Community Grant for its Cents for Seeds program. And in 2020, they have received another round of funding.

The program began in 2010 following decades of internal conflict with the Lord’s Resistance Army and Joseph Kony. As people began leaving Internally Displaced Persons camps and returning to their communities, they had nothing to plant in the fertile, Ugandan soil.

“We partner with local communities and empower the women with the Cents for Seeds program. We know women are key to reducing poverty and increasing wellbeing as the region continues to heal,” explain Caitlin over the phone. “This is a hand up, not a handout. The program is designed to empower women to generate their own income and escape the cycle of poverty for themselves and their families. These women reinvest their earnings into food, education and healthcare.”

The microloan system was set up at the end of the first harvest. Now, with their own seeds and harvest, women are giving back their first seed loan which is passed on to another woman, expanding the reach and sustainability of the program.

“There are two rainy seasons,” says Caitlin. “So we’re on a strict timeline. We had to get the seeds in by June at the latest to make harvest.”

Women in the program also have access to savings and loan groups, enabling them to borrow money for emergencies or other needs.

“These women are able to send their children to school and expand their business through this program. It’s really changing their lives.

“The grant from Australian Ethical Super has enabled us for the last two years to scale our project and reach more households than we otherwise would have, and had a positive impact on the wellbeing of thousands of people in northern Uganda,” says Caitlin.

Love Mercy are recipients of our 2020 Community Grants to help them create an emergency response fund to safeguard the livelihoods, food security and health of the most vulnerable communities in Northern Uganda during the Covid-19 crisis.

An additional 8,000 of the areas most vulnerable women will have farming support, access to seeds, fertilisers as well as agricultural education.