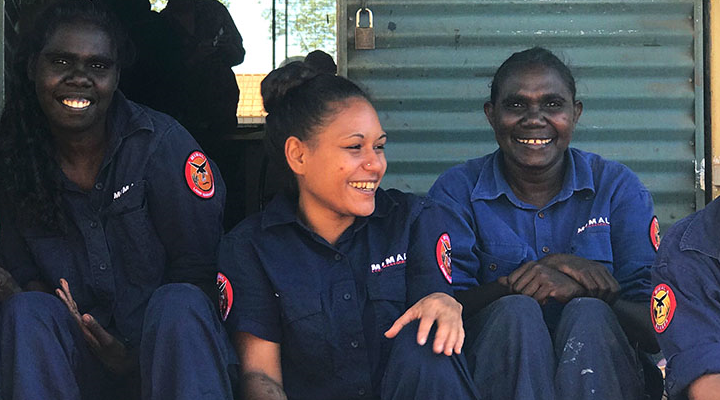 In the heart of Arnhem Land a group of female rangers are helping to protect and conserve their Country for future generations. We were invited to experience their work and walked away with a deep and profound appreciation for our First Nations People's intrinsic connection to nature.

We were in the heart of Arnhem Land to join the female ranger program for a few days, learning about the cultural and conservation work.

One of our Strategic Grant recipients, Karrkad Kanjdji Trust (KKT) and Mimal Land Management Aboriginal Corporation (Mimal) work in partnership in West and Central Arnhem Land, some of the most culturally rich and biodiverse regions in Australia. Mimal focuses on bringing benefits to Country and culture for Dalabon, Rembarrnga and Mayili landowners and people of south central Arnhem Land in the Northern Territory.

A pivotal component of this work is Mimal’s employment of local Aboriginal Ranger groups to work on projects that focus on native species conservation, management of cultural heritage, education on Country, bicultural programs, sustainability initiatives and carbon abatement through traditional burning.

We support Mimal through KKT, an organisation that connects Indigenous ranger programs with funding to bring their programs to life. KKT was established by the Traditional Owners of Warddeken and Djelk Indigenous Protected Areas (IPAs) in 2010. Their name, Karrkad Kanjdji Trust (pronounced gar-gut gun-jee), refers to the stone country highlands and savanna lowlands of Arnhem Land where they work together to protect.

“The ranger program is encouraging more female, Indigenous rangers into the workforce,” explains Stacy Irving, CEO of KKT, as we sit by the watering hole in the middle of the day.

“Ranger work is a primary source of employment in this part of the world. It helps people live on their ancestral lands. They’re employed to undertake conservation and cultural heritage activities which are of national and global relevance.

“A lot of cultural and environmental information is held specifically by women. By having a predominantly male ranger program, which was the case in the past, there were parts of Country not being cared for.”

Where we sit is the heart of one of their projects, the regeneration of a watering hole.

“Through ecological monitoring, bird surveys, vegetation surveys and camera traps for small mammals you can see the difference between water holes that are fenced from feral animals compared to those outside of the fences. It’s easy to see how regeneration can work in this part of the world.”

And indeed we could see the difference the work had made. We were sitting amongst lush vegetation in an area fenced off and protected. Directly on the other side the watering hole was muddied and the vegetation struggling.

Feral animals are a huge issue in many parts of Australia. Buffalos, wild horses and donkeys roam the land, but it’s when they tread to the water that they trample plants and dirty the water. As a result the ecological make-up of the area changes; plants struggle to grow back, weeds come in and native animal populations that use the same areas decline.

We spent a few days with the rangers helping (or hindering, depending who you ask) to set up camera traps, count the bird life and learn about conservation in the area.

It was an honour to be invited onto Country. We walked away with a deeper understanding and appreciation for our First Nations people and their connection to the land and their ancestors.

Cool burns in a hot country

As we drove between Darwin to Mimal we passed a number of bushfires. It was October 2019 and the start of what was to become Australia’s worst fire season. During December 2019 and January 2020, as the fires raged across the country and people debated proper fire management, First Nations voices rose as an authority we should listen to, drawing on a deep understanding of the importance of cool burns to manage the land and protect it from devastating fires.

We saw first-hand the impact of cool burns and the way fire has shaped Australia. It was the middle of the Northern Territories fire season, so while many bushfires burnt, we were told it wasn’t as bad as it could have been for just how dry it is.

“Indigenous Australians burnt their land as part of the traditional cultural practices,” explained James, who works with KKT. “It’s called a cool burn because there is more water in the fuel load. Cool burns are less intense than fires later in the dry season, so they emit less emissions.”

“Cool burns emit over 50% less CO2 emissions than fires in the late season. The CO2 emissions saved by conducting cool burns generate carbon credits, which are sold onto the open carbon offset market to generate revenue for ranger groups and their communities.”

Later when sitting with some of the young women in the ranger program, I asked them what their favourite aspect of their work is. Unanimously they agreed, fire management.

“Along with the environmental outcomes the women are working on, we are seeing a lot of training and development for the women,” says Stacey. “But the program is also working closely with the school and getting kids out on Country with rangers and Elders, teaching them about cultural heritage and trying to instil that into the next generation.

“Indigenous ranger work is important in communities because they provide meaningful jobs on Country and enable people to live on their ancestral land and continue practices that have been ongoing for tens of thousands of years. These jobs provide an opportunity for their children to grow up here, learn from their Elders and carry on those traditions.

It’s an incredible privilege to be invited onto Country by the Traditional Owners and embraced by the community. We took the time to listen and learn and will continue to further understand and celebrate the incredible knowledge and culture of our First Nations people.

We look forward to the ongoing relationship we have built with KKT and Mimal Land Management and can’t wait to see what else the women rangers do to conserve their Country and share their work with the next generation.