B Corps: Business as a force for good 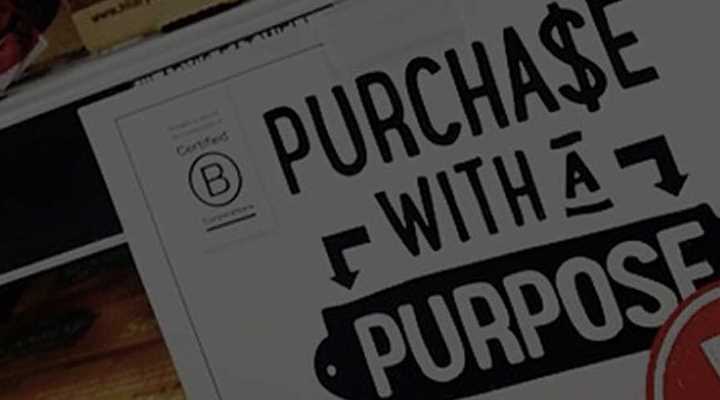 When you ask most people what makes a business successful, the ability to create consistent profit is normally top of the list. A growing group however believes there has to be a more comprehensive set of metrics.

Together the B Corporation movement is building worldwide, creating a momentum in which business is a force for good that can maximise positive impact alongside profits.

One of the central figures within this shifting perspective is Bart Houlahan, co-founder of US-based organisation B Lab. “Our long-term mission is to redefine success in business so that we’re using other metrics beyond financial, to evaluate what it means to be a successful business. Which might include community engagement, worker involvement, and environmental footprint,” says Bart.

Founded in 2006, B Lab has developed a number of initiatives to achieve their goal. These include the B Corporation certification and the B Impact Assessment, a free online tool for business owners to measure and validate a company’s social and environmental performance.

B Lab has also made waves by helping change corporate legislation in 19 US states to include the benefit corporation. The new status provides legal safeguards for companies, allowing them to pursue positive social and environmental outcomes, not just shareholder profit.

We caught up with Bart a few months ago when he was in Australia to launch the local arm of B-Corps. At events in Sydney and Melbourne, he gave rousing speeches celebrating the B Corp movement and the 45 Australian companies that formed the founding local community.

The newly certified Australian companies joined over 1,100 companies worldwide, from over 60 industries, working together towards one unifying goal: to balance profit with purpose.

Like the international B Corp community, the founding group’s diverse. There were those you’d expect – businesses providing environmentally and socially sustainable products and services like TOM Organics and Whole Kids or social enterprises like Three-Sistas from Cairns. But there were also tech start-ups, recruitment firms, consultancy firms and property developers.

We were the only ASX-listed company in the founding group – and only the second publicly listed company globally – to become a B Corp.

The variety in the community is proof that you don’t have to deliver a certain type of service or product to build a purpose-driven company. You just have to want to do a better form of business.

Bart has drawn on his experience as former CFO of a purpose-driven business.

Bart and his fellow B Lab co-founders have a unique perspective on the challenges of building a company with values at its core. As former CFO and president of American basketball merchandise label AND1, Bart helped spearhead a community-centric global business. During his tenure, AND1 offered their 300 staff the opportunity to do 40 hours of paid volunteer work every year and flexible work schedules. They ensured their overseas manufacturers were rigorously audited, and stuck to AND1’s code of practice. They also gave away 10 per cent of their profit to charities each year.

Their approach seemed to pay off. At its peak, AND1 was in 80 countries and a global leader in footwear and apparel. But as they scaled Bart says it became harder to maintain their commitment to community, workers and the environment. Just how hard, became obvious at the company’s liquidation in 2005. It seemed the transition to becoming a public company created a situation where anything that was about something other than only maximising shareholder profit didn’t exist.

“Within a few months of the sale [the new owner] had stripped whatever was left of our commitment to employees, community and environment out of the company,” Bart says. The experience catalysed the entrepreneur and two of his peers to challenge the structure. They wanted to work to ensure that in the future it would be possible for entrepreneurs to grow their business without compromising their company and its values.

“We just thought that their just had to be a better way that a company could scale, raise capital, have liquidity and hold onto mission. That’s what brought me to [B Corps],” Bart says.

In many ways, Australian Ethical and many of the other certified B-Corps were essentially B-Corps before the certification existed. The world over, there are countless companies large and small making strides towards a more sustainable future.

So why bother to become a B-Corp? Up until now, companies like Australian Ethical haven’t had a recognisable and respected stamp of authentication which cuts through the problems of clever marketing and greenwashing. Companies that become a certified B Corp have voluntarily met rigorous standards around social and environmental performance, accountability and transparency.

Ultimately, the objective is that B Corp certification becomes to business what Fairtrade or Australian Certified Organic labels have achieved for other businesses. The label should instantaneously prove to the consumer, employee or investor that a company does what it says it does.

There’s no resting on your laurels either. To ensure that certified companies make the commitment and not only stick to it but strive to continually be better, B Corporations are required to complete a reassessment every two years.

“What distinguishes our certification from most existing eco-labels is that it is comprehensive and it looks at the whole company,” says Bart. The standards for certification are managed externally by an independent standards advisory council that oversees all the questions and all of the weights. The council is comprised of academics, thought leaders, practitioners and experts who decide what indeed is ‘best in class’ behaviour in social and environmental performance.

Australian company Whole Kids, producers of organic, healthy kids snacks are one of the 1,100 certified B Corps worldwide.

Despite now fulfilling precisely what he and his co-founders set out to, Bart is emphatic that neither he nor B Lab is ‘the story’. The story, he says, lies in the creation of a community of some 1,100 (and counting) certified B Corps, all which are innovative in solving the world’s greatest challenges.

In many ways he says, it is a return to the way things used to be with B-Corps harking back to a time before corporates lost their way. “I think the divorce of values and money in business is not the history of the corporation,” says Bart.

“It is relatively new and only in the last forty or fifty years that we have gotten into a cycle where there has been both cultural norms and legal impediments that have reinforced that business is exclusively about creating private wealth.”

“If you go back to the beginnings of the corporate form, corporations were given their charters with an understanding that they would be producing value for society, and so if you look from a historical perspective.”

Bart points out how truly bizarre it is that the working population ever allowed corporate forces to shelve their personal values at the door each day. He believes any debate around the trade-off of profitability versus considerations around what’s best for employees, society, and environment is over.

“There are now over 40 studies that clearly indicate companies with a stronger ESG performance have longer-term value creation for their shareholders. The issue is, often directors and executives don’t feel like they have the freedom to make those choices because of the incredible pressure of short-termism.”

“[B Corp status] is just one of many ways beginning to chip away against what I think is largely insidious for capitalism in general – the idea that people have to consistently hit a quarter by quarter focus, rather than a long-term value creation focus for shareholders and more broadly for society,” Bart says.

There is also evidence that the long-term approach means businesses end up not only being more profitable over time, but more resilient as well. Data compiled by B Lab off the back of the GFC found that those in the B Corps community were 64 per cent more likely to survive an economic downturn.

“They were simply more resilient; they had the ability to attract and retain better talent, they had access to capital and they had better consumer loyalty. So it is important that we recognise that this isn’t just the right thing to do – it is a better way to do business.”

Redefining the future of business purpose

Ultimately, the end objective for Bart and B Corps is to create a marketplace where companies compete on a basis that includes profits but also metrics beyond finances.

“That’s the long-term vision. The hope is that by creating business engagement in society and the environment that we will ultimately create a shared and durable prosperity for all. That’s what we are working for, and honestly it is a generational objective but we are really excited that with 1,100 certified B Corporations, a thousand benefit corporations, and importantly 45 founding B Corporations in Australia, we are on our way.”

At Australian Ethical, we believe that more businesses should recognise their status as potentially powerful agents for change. By voluntarily meeting higher standards of transparency, accountability and performance, certified B Corps are helping to change the game.

Want to know more about B Corps in Australia or become one? Check out their website.