This school striker wants you to take action 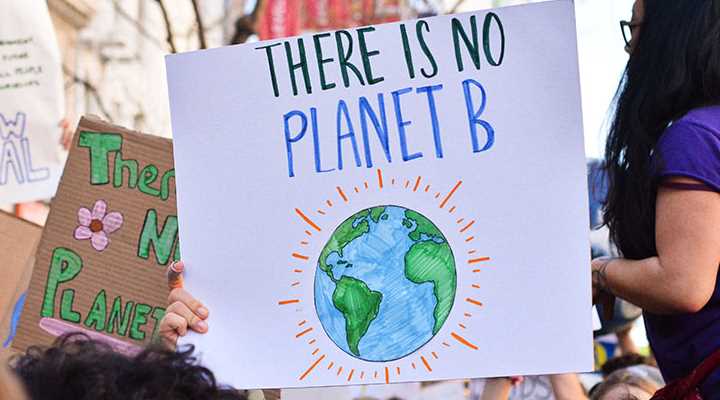 We’re proud to support 1 Million Women, a community of engaged women and girls who are fighting climate change in their everyday lives. This interview with school strike organiser Daisy Jeffrey was first published by 1 Million Women on 9 July 2019.

We’re proud to join the Climate Strike on 20 September. Australian Ethical employees will join students and other businesses to demand our government take action on climate change. We’re also inviting our members to strike with us. You can follow along on social media.

A rallying cry heard across climate protests is “The youth are rising, no more compromising”. And this chant rings true with tens of thousands of students and their supporters taking to the streets to demand climate action not just in Australia but all around the world. In March, the School Strike for Climate (SS4C) drew 30,000 to Sydney's Town Hall and from there, the movement is only set to grow bigger and bigger - if this interview is anything to go by.

We caught up with one of the lead Sydney organisers, 16-year-old Daisy Jeffrey, ahead of the next major strike on 20 September to find out more about the movement and how we can all get involved.

When did you first get involved with SS4C and what drove you to be involved?

Daisy: I heard about the school strike about a week before the first one happened in Sydney so I didn't really have enough time to get involved with the organising team. But I've got about 160 kids at my school and I think I managed to get maybe 50 or 60 kids to come along that day to the strike. It was just insane, it's just such an incredible vibe. I think often young people just have such frustration when they feel like people don't have the same motivation as them to do something. And you know here we were, five or six thousand kids out on the street doing something. And that was kind of my motivation to join the team. Then I started working with Stop Adani a fair bit and I spoke at one of their rallies a week later and it's just kind of gone on from there. It's been the most incredible experience.

And there was a lot of fear of climate change, especially a lot of kids, they tend to get disaster fatigue and then they just zone out and they kind of shut it out I suppose. And it's easier to talk about other things and forget that it exists. For me, joining School Strike 4 Climate was a way to tackle that fear and it turned more into anger about the fact that our politicians are really doing next to nothing to prevent further climate change. And we've used that anger in such a productive way to try and get effective, legislative change for more climate action.

Why are school students the ones leading this change?

Daisy: Because it affects our generation the most. We're starting to see a lot of uni students join in now. I was speaking at a conference the other day trying to mobilise university students to come along for September 20th and there's a huge amount of enthusiasm because this strike we're also inviting adults because we've reached the extent that we can go to with students and now we really need everyone to join forces. And definitely I really think that the reason our generation is the one taking to the streets and demanding action is just because it affects us, it's our future and for some of us it's stunning that the people in parliament, the people in power, generally have chosen to prioritise coal mining over our future.

In May this year, Australia voted back into power a political party that has abysmal climate policies. How does it make you feel – and your peers who you're engaged with – when you see in Australia and all around the world, governments who don't take enough climate action being voted in?

Daisy: I had a few striker friends over [on election night] and we projected the results up onto the wall. And we were watching [ABC election analyst] Antony Green and we were just crying. And at first we were really angry and we were enthusiastic when the memes about cutting Queensland out of Australia came out, but you know for me... my Grandad and his father and his father before that, they were all coal miners, they were coal mining engineers. And also just looking at the situation up in Queensland, you know you have to take time to understand someone's situation and why they would have voted against Labor or the Greens. And frankly you know, I understand, and I understand why they voted Liberal and it was so disappointing for us but for them their concern is for their family and their community and their income and their identity. So I feel certainly less angry than I was, it's really important to have an element of understanding there. Also you know what played a large role in those votes turning against Labor was that $81 million scare campaign that Clive Palmer ran. It was really against progressive parties and it was pushing people to vote conservative so that's what I'm seriously angry at. That someone can spend that amount of money on a campaign.

Has the election and results changed the way that the school strikers are organising their actions?

Daisy: Yeah it changed big time, because I think we all kind of thought we were cruising for a Labor victory – not to say that Labor is the greatest party of all time. It's really not that hard to be better than the Liberals [on climate change], all you have to have is an existing climate policy or one that functions. And we would have had to do a huge amount of work to try to get Labor to move in the right direction [if they had been elected] but with the Liberals it just feels impossible. I think that for us – and especially with Greta Thunberg calling on adults to join the strikes – but for us in particular here in Australia we have a real need to get all the support we can because they're not going to listen to kids, they don't care about the amount of pressure we're putting on them. And obviously they would prefer that we were back in school and it's at least twice as hard now to do that work because we effectively lost the election. The amount of sympathy and the attention that we had before the election has just kind of vanished into thin air, so we have to do a huge amount of work to gain that support back and that awareness, that need to do right by the kids. That's part of the reason why we're targeting adults right now because we just need those numbers, we need people to be there at the strike. We need people in the tens of thousands. We had 30,000 people there last time and we're really hoping for double that. And so we're hoping everyone takes to the streets and hopefully it's going to be a really incredible day [at the next major strike] and we can continue the pressure from there.

And another thing that we learnt from the election was that those communities in Queensland, in the Hunter Valley, they need to know that there is going to be a stable transition for them into the age of renewable energy. And what we learn from that is that we can't toss around words with these families and these communities, they need people to be real with them because they're so used to being thrown around by politicians. And some of the activist community have turned a blind eye to their needs and it's really important that we don't leave them behind in the process. So it's really important that we're completely transparent with them and that we definitely work with them to keep their communities together as best as possible. And it's going to be a really difficult process. And unfortunately for us students, our power is going out in the streets and using our voice and we can demand a just transition, but when it comes to the actual details of the policies that are going to help these communities that's not really up to us because we're kids so we're relying on the unions and the politicians to put together something that is actually going to work.

Tell me more about the plans for September 20.

Daisy: We need those numbers in September, we have to make it the biggest protest possible because you know you cannot lose numbers and even if we only gain slightly in numbers, it looks like we're losing momentum and we cannot afford to do that because we aren't losing momentum, people are really angry. What I've been worried about is that people are in despair now and I mean I think a huge amount of people are really, really angry about the election and so they'll definitely be there. I think we definitely have the numbers with students but we're really working on targeting adults right now, and we're working with the unions as well to talk with them about what their presence at the strike is going to look like on the day.

What can everyone do to help out?

Daisy: Use social media to promote it everywhere, bring everyone you know, drag your colleagues along if you can shut your workplace for the day. I know that sounds terrible but that is awesome for us — except for public transport because people need public transport to get to the strike. We really want to shut down Australia and bring everyone along to those strikes so we can make sure our politicians know that they really have no choice other than supporting us in this move towards renewable energy and for the climate action to reduce emissions.

Daisy: Be there. Be there September 20th, 12pm at the Domain in Sydney and there are over 50 other locations around Australia. And if you have some interest in your area and you're wanting to set up a strike just send us a message on Facebook or Instagram and we'll put you in touch with a striker in your area.

Go to https://www.schoolstrike4climate.com/sept20 for more information and to find your nearest strike!

This article was first published by 1 Million Women.