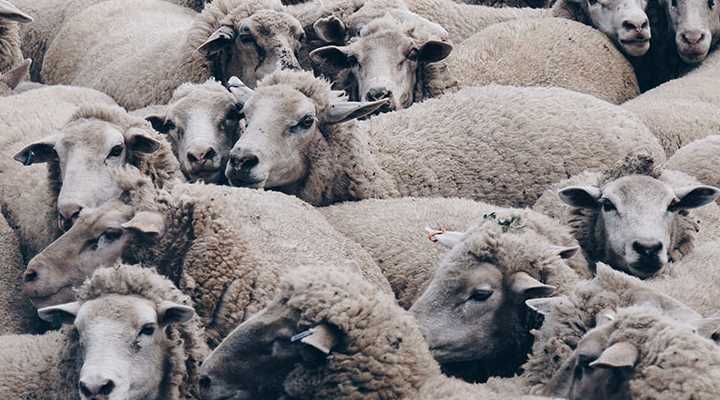 Just before news broke of the latest live export scandal, we sent our ethics analyst Amanda Richman to volunteer with Animals Australia’s legal team and help with their live export work. She explains why the live export trade needs to stop and what individuals can do to help.

Two things struck me when I first saw the footage showing what animals endure on live export ships.

The first was that it was the most horrific footage of animal cruelty I had ever seen (and as a part-time animal protection lawyer, this is not the first time I have seen footage of animal abuse). The regulations require an exporter to notify the government if the mortality rate on board a live export ship is 2% or more. This is called a ‘notifiable incident’. The fact that 2% need to die on a 3 week voyage before a notifiable incident is triggered speaks volumes about the conditions in which animals are kept on these ships. Even when mortality rates are below the 2% threshold, all the animals will have suffered.

The second thing that struck me was how well the live export industry duped the public. Each time Animals Australia has exposed the mistreatment of Australian animals in export markets (for example in Indonesia, Vietnam, the Middle East and Pakistan), industry representatives said they were shocked, appalled and disappointed – words which imply ignorance and suggest the live export industry does not condone animal cruelty.

Initial public outrage was pacified by assurances from the industry that conditions have since improved, that the Australian live export industry is not only a leader in animal welfare, it has had a positive influence on animal welfare globally, and that subsequent incidents have been ‘one-off’ events that can be appropriately managed.

But the cruelty that has now been exposed takes place on live export ships, where the animals are under the direct responsibility of the Australian export companies themselves. Industry cannot feign shock this time. Nor can they claim that these are one-off events because the footage comes from five different shipments. The footage shows systemic problems (many of which are unavoidable when live animals are crammed on board ships for long voyages) and is reflective of how the industry has been operating for decades.

In fact, irrefutable evidence of these issues surfaced five years ago. In 2012 a veterinarian working at the Department of Agriculture submitted a report documenting what she had witnessed working on board Australian live export ships. The report contained photographic evidence of animals suffocating in overcrowded pens and drowning in faeces. In response, the government sacked her. The reason given for her dismissal was that ‘the industry with which we engage has expressed the view that they cannot work with you’ – an alarming insight into the influence the live export industry has over its own regulator.

The industry’s response to the veterinarian’s evidence was to claim that the photographs were not reflective of current practice. Simon Crean, Chairman of the Australian Livestock Exporters Council said ‘anyone can trot out the old photo, talk about the past… I don’t think there has been evidence of these sorts of photos since’. A cynical argument from an industry which felt safe in the knowledge that, whatever happens on Australian live export ships, it was unlikely any further photographic evidence would be made public.

For all the industry’s claims that they are subject to the most stringent animal welfare laws in the world, there is no requirement for any independent oversight over what actually takes place on board a ship. Which effectively means anything can happen. The regulations serve as nothing more than a convenient cover. And any would-be whistle-blowers have learned it’s better to stay quiet after what happened to the last person who spoke out.

What this latest exposé has made clear is that, while the industry has been claiming they are leaders in animal welfare, these atrocities have been occurring while animals are under their direct responsibility. Notwithstanding this, the Minister for Agriculture (although suitably horrified by the footage) wants to give the industry another chance. But this is not an industry that can be trusted.

If the trade is allowed to continue, the industry will claim they have made significant improvements and meanwhile do their best to make sure no footage ever makes it to our television screens again. This footage has only surfaced because of one brave whistle-blower who has put his livelihood (and potentially his life) at risk to do the right thing. If it was not for him, the live export industry would have continued to inflict this extreme cruelty on animals unchecked. We cannot wait for another exposé before we shut the trade down. It needs to end now.

Here are three key things individuals can do to help.

We have seen that with past exposés of animal cruelty (for example, greyhound racing) we have moments of moral clarity that are too short-lived to result in change. It is important that this time public fatigue and politics don’t stand in the way of making sure this type of cruelty never happens again.