13 countries that give us hope for a green future 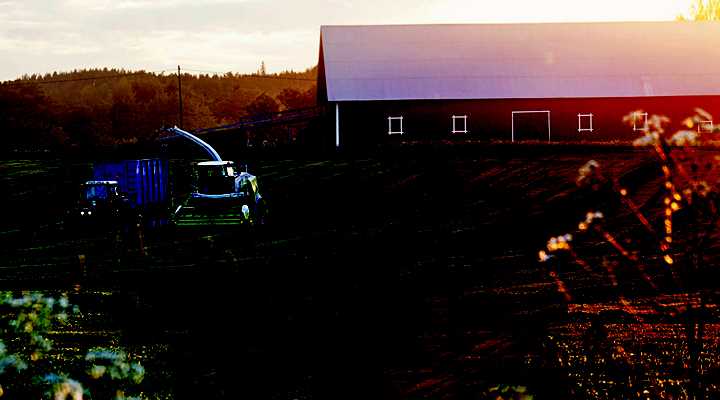 Check out these 13 countries that show true determination to reduce emissions, even if the Australian government isn't giving us much hope for a greener future.

The Australian government’s climate change commitments leave much to be desired. But don’t let that get you down. Check out these 13 countries that show true determination to reduce emissions, and you’ll discover a globally green future is closer than you think!

To keep us all inspired until our blissful green future finally does arrive (c’mon, stay positive people!), we’ve highlighted a few countries ignoring the more sluggish nations of the world – like Australia – by taking measures to end climate change in their own hands.

In 2015, Sweden announced an ambitious goal to be the world’s first fossil-free nation – slashing their use of fossil fuels and ramping up investment in solar, wind, energy storage, smart grids, and clean transport (they’re all things we invest in at Australian Ethical too!). The Swedes were also one of the first nations to sign and ratify the Kyoto Protocol in 1998. Sweden is a model example of how a country can maintain its growth while reducing its greenhouse gas emissions. With more investment in renewables, the country can reduce its emissions by 40% in time for 2020.

Llanos de Cortez is just one of Costa Rica’s many waterfalls that contribute to its great river system used for hydropower.

Thanks to its unique climate and geography, Costa Rica gives hope for a green world by showing us that it’s not entirely impossible – or difficult – to achieve 99% renewable energy generation. For this group of islands, 285 days were free of fossil fuel usage in 2015. That’s just 80 days where Costa Rica had to use some fossil fuels – shamefully leagues ahead of our island home Australia! The bulk of the country’s power was generated by hydropower, courtesy of all those tropical rainfalls and a large river system. The rest was made up of a mix of geothermal energy, wind, biomass, and solar power. Costa Rica is also the country with the highest Happy Planet Index in the world… coincidence? We don’t think so. 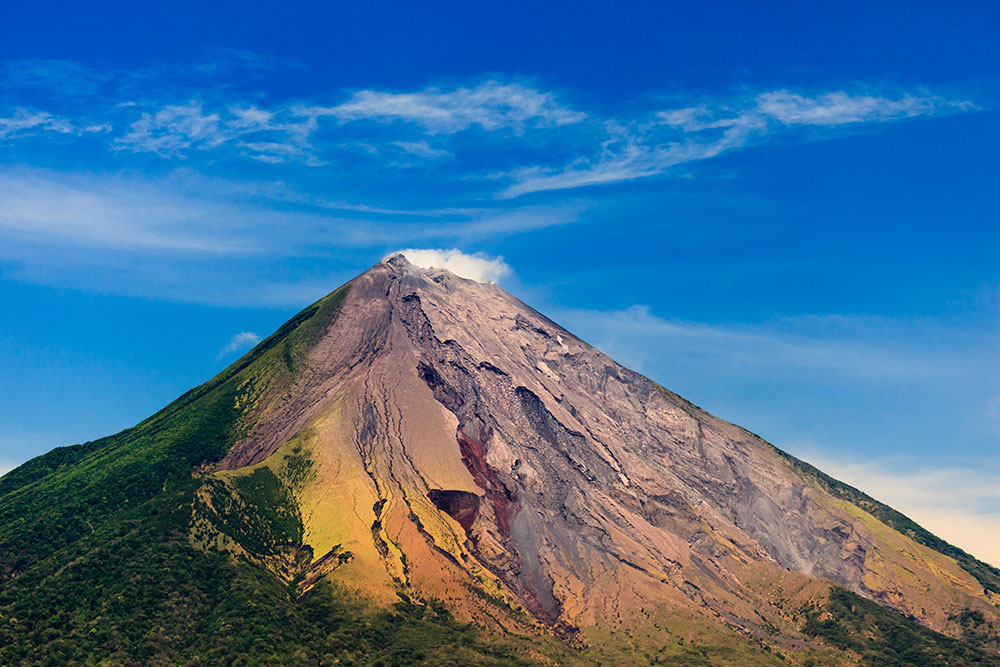 The colourful ash deposits of Conception Volcano, one of Nicaragua’s most active volcanos in Ometepe.

Never one to be outdone by its neighbours, Nicaragua saw renewables comprise of 54% of all its electricity production from June 2015. This was thanks to having tapped into all its natural resources – strong winds, bright sunshine, and 19 active but stable volcanoes. In fact, Nicaraguan officials are almost ready to say adios to foreign oil, setting goals of 75% renewable energy by 2017 and 90% by 2020.

The solar village in southern Germany – a country renowned for its reliable renewable and alternative energies.

Germany is pioneering an epochal transformation it calls the ‘energiewende’ – an energy revolution that scientists say all nations must one day go through if humans truly want to tackle climate change. You know a country is serious about climate change when they create a word that sounds as impressive as energiewende. (Go on, just try to say it without feeling empowered!)

Germany has switched off 9 of its 17 nuclear power plants, showing that they’re serious about their goal to be nuclear reactor-free by 2022. The country also leads the world in solar PV capacity, and has even been able to generate as much of 78% of a day’s electricity demands from renewables. 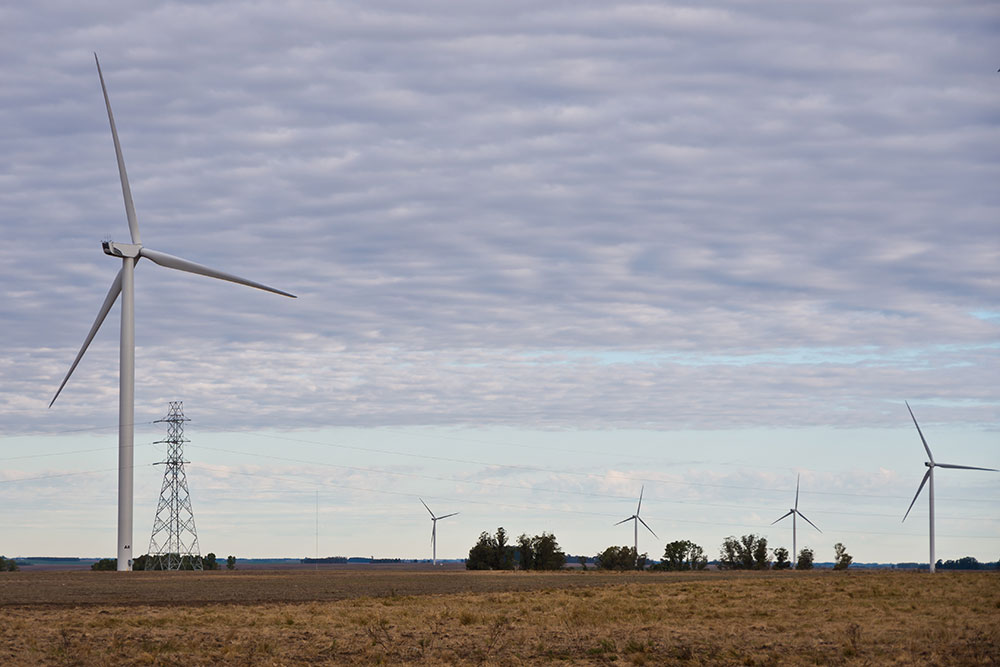 Wind turbines like this are a common sight in rural Uruguay.

It may be small, but it’s mighty! For the last 10 years, Uruguay has invested heavily in wind and solar, and is now 95% powered by renewables. Big achievement, right? But what’s really getting the sceptics’ noses out of joint is that all this was achieved without subsidies or increases in consumer costs. It’s great to see South America’s second smallest country reinventing itself as a beacon for innovation and progress. According to the World Wildlife Fund, Uruguay is ‘defining global trends in renewable energy investment’. So you can understand Australian Ethical’s affection for this ‘lil country when know how much our company supports investing in a clean, bright future… 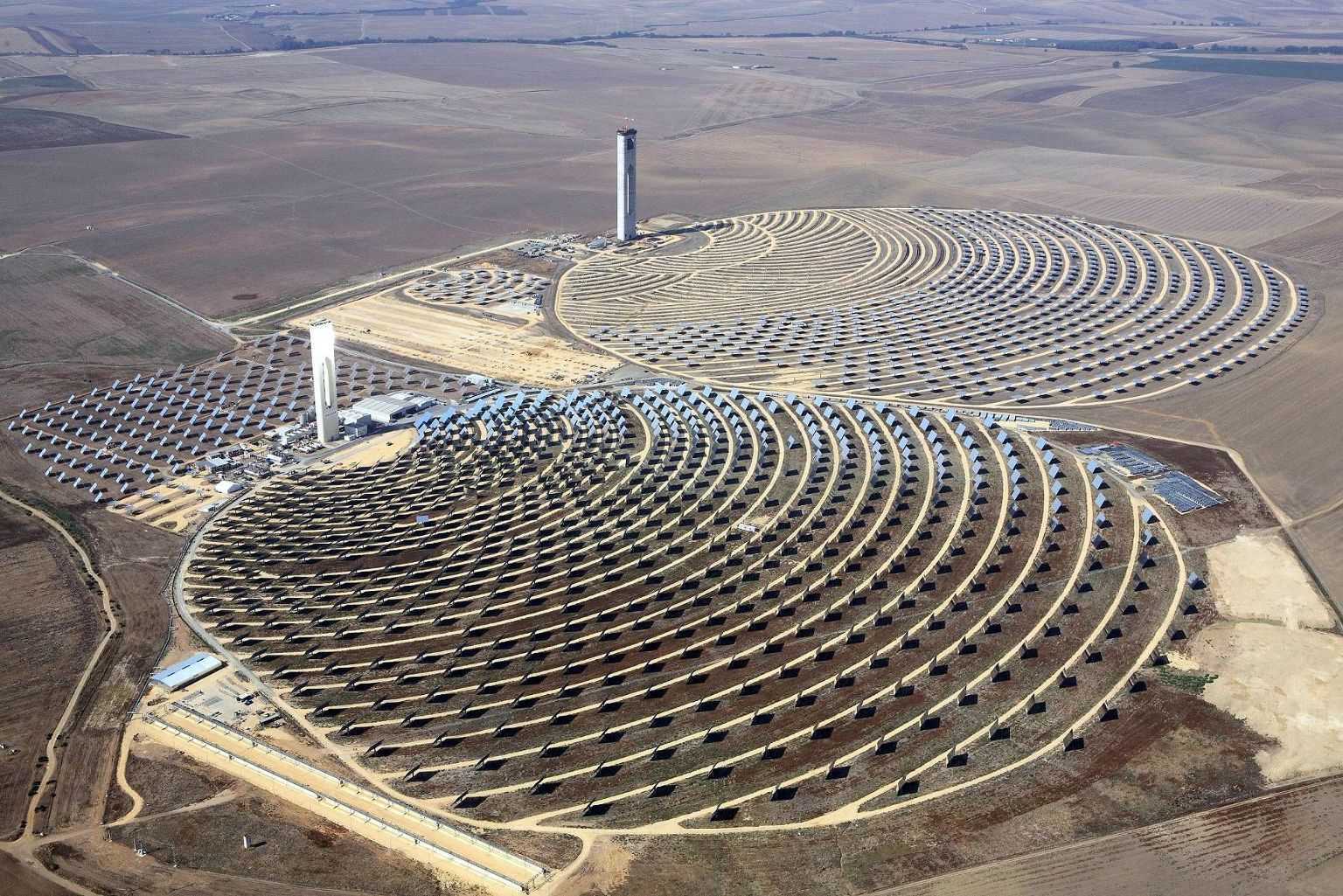 The world’s largest concentrated large-scale solar farm is a spectacular scene in the stark Moroccan landscape. On the left, phase 1 of the Noor Concentrated Solar Power plant is now generating energy. On the right, phase 2 will be completed in 2017 and phase 3 in 2018. Photo credit: The World Bank.

With lots and lots of sunshine to enjoy, Morocco decided to make the most of its harsh desert sun and build the largest concentrated solar plant on Earth. With its accompanying wind and hydro plants, the mega-project will provide half of the country’s electricity by 2020. But the country is looking beyond that, with the current Minister Delegate in Charge of the Environment, Hakima El Haite, participating in the COP21 talks and publicly saying that she hopes to export Morocco’s solar energy to other countries that aren’t as blessed, sunshine-wise. Geez, turns out they’re environmental and generous! 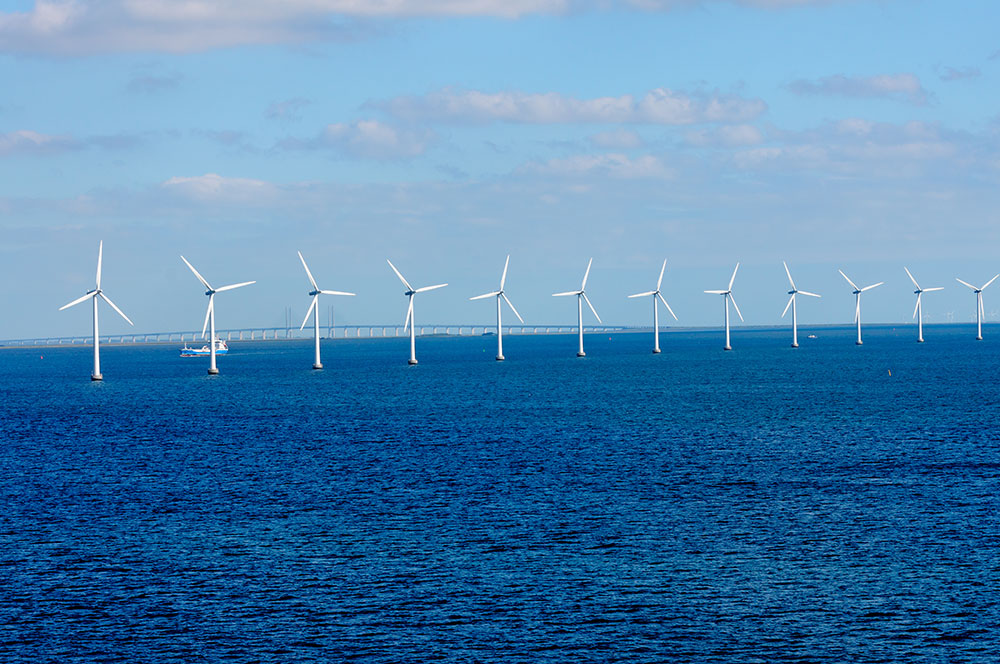 An offshore wind farm in the Baltic Sea, off the coast of Copenhagen.

Of all the countries in the world, Denmark is the one that certainly knows a thing or two about windmills, and perhaps because of this it was one of the first nations to make use of wind turbines for energy production. Today the Danes lead the world in wind power, which produces 40% of its total electricity. You wouldn’t be hard-pressed to find a Danish person who dreams of their country reaching their goal to be 100% renewable by 2050, and they have a good chance to get there as they recently boasted of a day where 140% of the country’s electrical power was created by wind turbines. Good luck, fair country, and run with it like the wind! 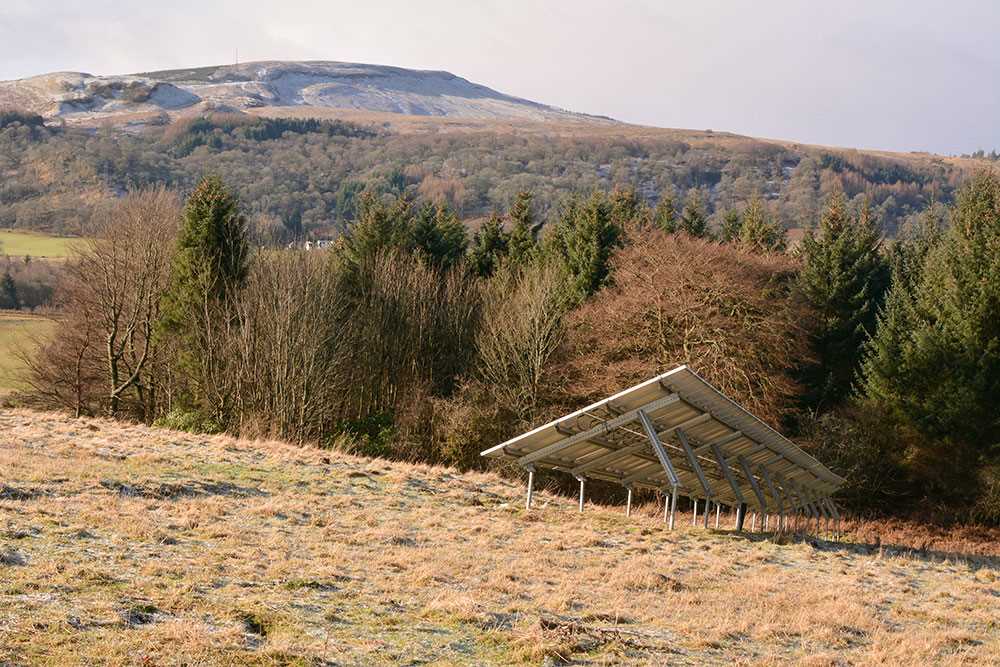 Solar panels in the Scottish countryside.

The new Scottish government recently tackled climate sceptics head-on by launching a huge marketing campaign on climate change, broadcast across every media channel in Scotland for eight weeks. Committed climate change warriors, the Scots are already producing the equivalent of 97% of household electricity needs with wind power. During the summer months, Aberdeen, Edinburgh, Glasgow, and Inverness all harvest enough solar energy to power every single Scottish home - Check out our article for more information about the potential of this amazing technology.

Environmental consciousness is not at the forefront of people’s minds when they think of Bangladesh, but the country is making major changes to go green!

This little country has a very big incentive to fight climate change, with the 2015 Climate Change Vulnerability Index ranking Bangladesh first in terms of extreme risk from climate change – specifically due to rising sea levels and mass flooding events. The number of solar-powered homes in Bangladesh is surging, with the area now experiencing the world’s fastest expansion of solar energy. About 3.5 million homes in Bangladesh are now powered by solar energy. This not only means fewer carbon emissions, but also increased jobs and a safer future for Bangladeshi women, who will now have access to education, TV news and communication, and cleaner cooking appliances.

A solar energy plant in Shanghai.

Okay, so their massive population issues might mean that China can’t really be considered a ‘green’ country, but in terms of renewable energy, there’s commendable growing momentum. The country is turning heads for its bold approach – for example, 800 Beijing primary and middle schools have been turned into ‘sunshine schools’ – schools covered with 100 megawatts of solar panels to power classrooms. This is just one of the many projects China is taking on in order to achieve the goals it agreed to at COP21. The truth is, China sees climate change as both an existential risk, and major opportunity, as the country is looking to be a leader in both renewable energy investment and low-carbon technologies. Watch this space! 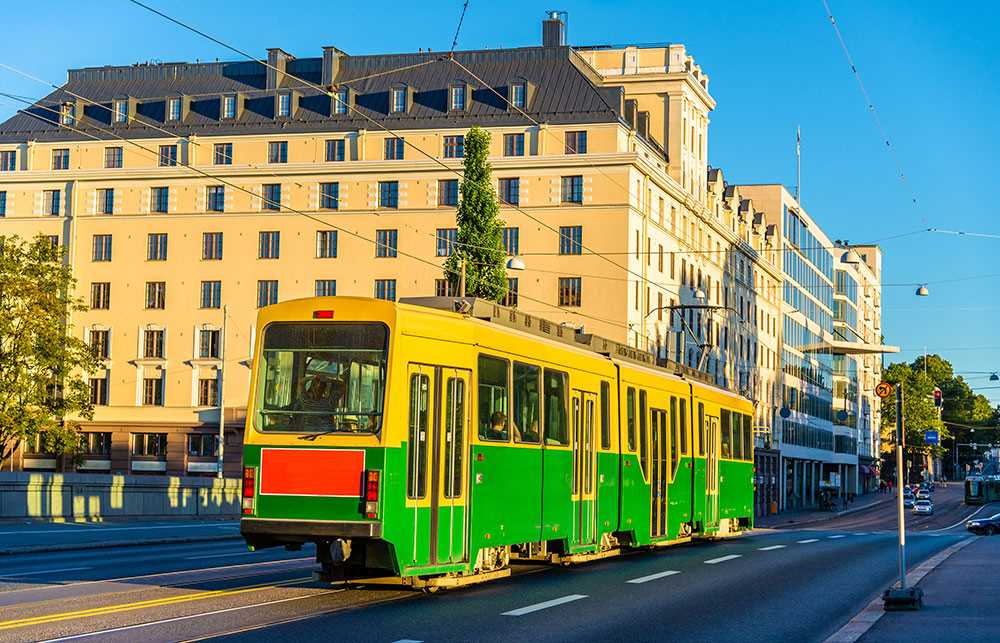 Finland is quickly moving in the right direction when it comes to reducing harmful emissions – like using trams instead of buses to transport people around Helsinki.

Another country where the curse of strong winds brings great blessings; wind power is quickly transforming Finland’s energy needs. It doesn’t stop there though, the country’s President Sauli Niinisto promised last year to reduce the country's greenhouse gas emissions by at least 40% from 1990 levels by 2030. With a new law countering climate change passed in June 2015, Finland should be well on the path to success, with predictions the country can reduce 80% of its emissions in the next forty years. She may not be as far ahead as her Scandinavian neighbours Sweden and Denmark, but Finland is quickly becoming a top contender for a fossil-free future. 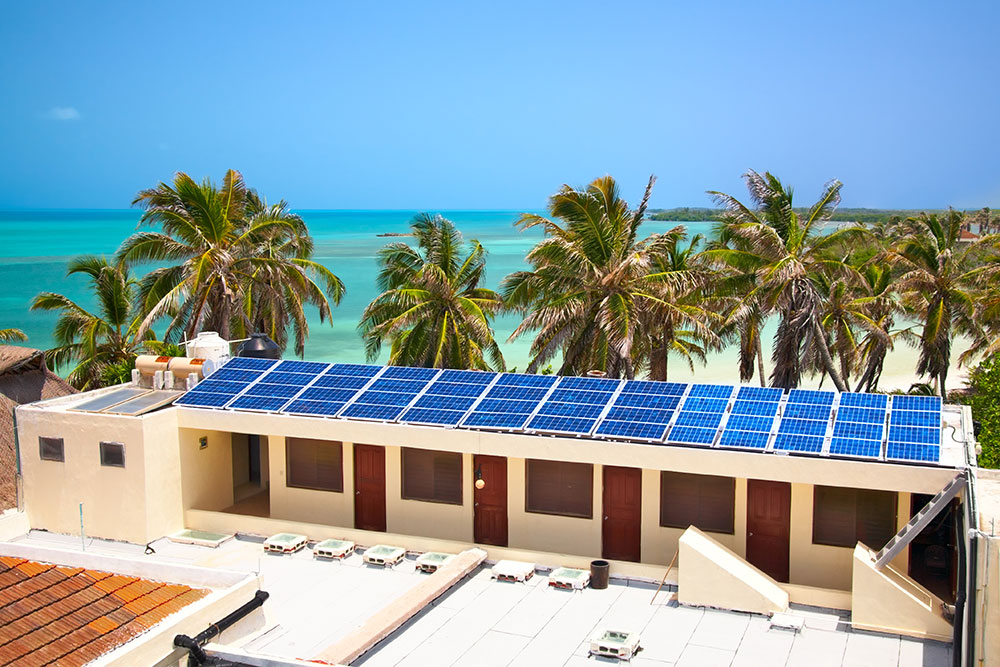 A solar panel on a building in paradise – Isla Contoy, Mexico.

Even though Mexico’s efforts may be at a way smaller scale than some of the other countries on this list, lots of little changes are slowly making a big difference to Mexico’s overall global contribution. And we think that counts for something. For example, in 2012, Mexico distributed 23 million energy-saving light bulbs for free, helping families save up to 18% on their electricity and preventing the release of 1.4 million tonnes of CO2 emissions per year. Baby steps.

There’s a lot of wind passing through the landscapes of Jordan – and it’s about to be used for good!

And finally, we’re lucky to have one example from the Middle East; Jordan isn’t there yet, but it’s likely to be the leading Arab country when it comes to renewable energy. Jordan is one very windy country – with a fairly constant wind speed of about 10 metres per second (36 km/hour) in many places. And you know what that means – it’s a more than ideal spot for wind farming. Current advisor to the Minister of Energy, Ziad Jibril, is looking to the future and reckons the country will very soon have solar and wind projects with a capacity of about 1,600 megawatts</a>, enough to provide roughly 11% of the power needs of the kingdom.

2015 was the year for the sustainable energy sector, with countries all over the world getting out there and becoming increasingly involved in the fight against climate change. With all of this growing momentum around us, here are just some of last year’s highlights still fresh in our minds:

While this doesn’t necessarily mean that climate change is over and our bright, clean, green future is finally here, it does show that the usual sluggishness in dealing with climate change is starting to shift. More countries are starting to take note of the desperate need for change. Sure, it’s taken us humans a while to get our act together – but better late than never, right?

What other great green global actions have you been inspired by? We’d love to hear from you! Head over to our Facebook page to become part of the discussion, on this post here.