The ocean has a deep problem with plastic 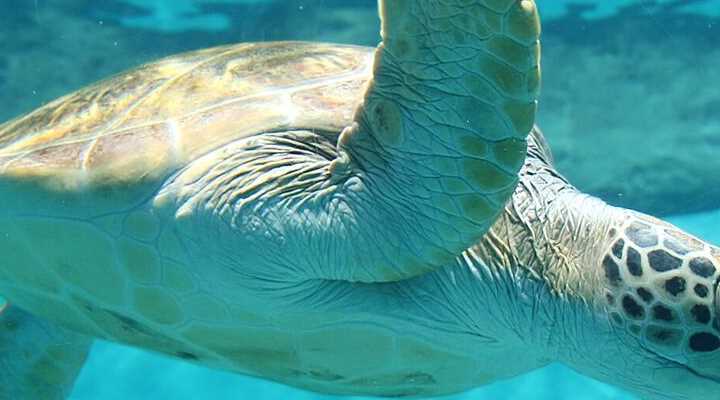 Meet one of our Community Grants 2016’s recipients – Taronga Conservation Society Australia and their ‘Plastic Free Oceans’ campaign. Our love for plastic continues to endanger marine life. Our recent experience meeting a green sea turtle recovering at the intensive unit of Taronga Wildlife hospital, from a life threatening plastic injury, brought us closer to this reality. We need to turn back the tide and the time to act is now.

Plastic is cheap and easy. However, when not disposed of properly it poses a major threat to marine mammals, birds, turtles and fish due to entanglement and ingestion when it enters our local environment as litter. The convenience of its use has taken over the need to keep our oceans clean and protect the lives of its inhabitants. Despite scores of day-to-day measures like thermos, green shopping bags and recycling facilities, the majority of us cannot be galvanised into action. Conservation agencies around the world including the British solo sailor, Dame Ellen Macarthur’s foundation, warns that there will be more waste plastic in the sea than fish by 2050.

Plastics production has increased twentyfold since 1964. It is expected to double again in the next 20 years and quadruple by 2050. Just 5% of plastics are recycled effectively, while 40% end up in landfill and a third in the world’s oceans.

The journey of plastic bottles explained

34.9 billion pieces of visible plastic were found in Australian waters last year. Quoting the Tasmanian Green Senator, our oceans have turned into a “plastic soup”. Environmental groups and scientists across the country have been calling for immediate action, which also led to a senate inquiry into marine plastic pollution. But meanwhile, Australians’ love for plastic continues.

Sometimes a little motivation is all we need to be driven to act. It came to us when some of our staff paid a visit to the Taronga Zoo’s Wildlife Hospital. And it came in the form of a magnificent creature called Catherine.

The Story of Catherine

One of our 2016 Community Grants winners, Taronga Conservation Society Australia is running a ‘plastic free oceans’ education program that inspires guests, businesses and schools to take actions in their personal lives and pledge to reduce their use of single use plastic bags. It is here that we met the endangered green turtle, named ‘Catherine’ by hospital staff. This juvenile turtle was brought to the hospital for lifesaving care after being found floating in the water near Catherine Hill Bay, with fishing line wrapped around her left front flipper. The fishing line had completely severed the flipper and could not be saved. But Catherine bounced back after four months of intensive care. She moved into a larger pool during her rehabilitation and showed the hospital staff that she could swim strongly and find food, despite the missing limb.

Catherine was returned to the ocean after she completed her four months rehabilitation at the hospital. She made a remarkable recovery and splashed back into the water outside Sydney Headlands. Catherine was fitted with a satellite tracker before release to help the Taronga researchers trace the migration habitats of Green Turtles.

“It was amazing to see this beautiful creature spreading her flippers in the wild again and know that she will also contribute to our understanding and conservation of her endangered species,” said Libby Hall, Taronga Wildlife Hospital Manager.

Libby explained that this period of a juvenile turtle’s lifetime is known as ‘The Lost Years’ when it’s difficult to predict where they migrate to. It’s astonishing that these creatures have been on this planet for over 200 million years and there is still so much unknown about them. The tracker will reveal information on the habitats, which can help better protect the oceans.

Catherine’s story is a timely reminder that we need to protect our local environment and safely dispose of fishing lines, and ensure that rubbish and plastic don’t make it into the ocean. Taronga’s Wildlife Hospital alone has seen over 350 marine turtles brought insince 1984, mainly with plastic-related injuries. They either swallow the plastic, mistaking it for jellyfish, and it gets stuck in their gut, or choke and even be suffocated from single-use plastic bags. Taronga is already working to reduce the impact of marine debris on marine turtles, but you can help too.

Are you ready to break up with plastic?

Experts at Davos 2017 reached a conclusion as to how it is clear that no one actor can fight the plastic crisis alone. True. But if each of us pay enough attention to the widespread use of plastic in our daily lives and work together, the predicted future of plastic could be averted.

You recycle? Bravo! However, all plastics cannot easily be recycled so we need to reduce our use through the choices that we make. Let’s stop the plastic on land before it even gets a chance to end up in the ocean.

Read the full report published at Davos 2017 on the new plastics economy: Rethinking the Future of Plastics

…and watch happy Catherine swim away!