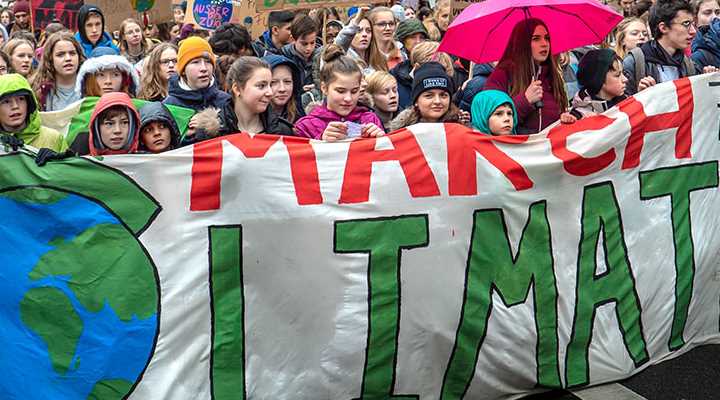 We’re proud to join the Climate Strike on 20 September. Australian Ethical employees will join students and other businesses to demand our government take action on climate change. We’re also inviting our members to strike with us. You can follow along on social media.

Every Friday in Stockholm, Sweden, a 16-year-old high school student refuses to attend school. Instead, she sits outside the Swedish parliament to protest against her government’s inaction on climate change. Her name is Greta Thunberg, and she’s the inspiration behind Fridays For Future – better known in Australia as School Strike 4 Climate. The movement mobilises students across the world to demand action on climate change. They hold regular strikes to bring attention to the climate emergency and the impact it will have on their generation. According to the Fridays For Future website, in just one week of March 2019 more than 1.6 million students and adults went on strike in over 125 countries – making this a significant social movement for change.

From self-imposed silence to speechmaker

Greta’s compelling TED talk, viewed more than 2.8 million times, describes her reaction after learning about climate change at eight years old. By age 11, she became so depressed about the world’s indifference to the climate emergency that she stopped talking and eating. Greta makes a compelling argument for the need for sustained action to halt dangerous levels of warming and stop the mass extinction of species. She also points out that the world’s wealthier countries need to reduce their emissions to zero within six to 12 years so that poorer countries can build the infrastructure they need for a comparable lifestyle.

Her unwavering focus and ability to see things outside box – something she ascribes to her Asperger syndrome – combine to make her an inspiring speaker. Greta has addressed rallies across Europe as well as the United Nations’ COP24 in Poland and the World Economic Forum in Davos, Switzerland. She’s also determined to practise what she preaches. Greta is a committed vegan due to the high greenhouse gas emissions from animal agriculture and she keeps her carbon footprint low by refusing to fly. She famously travelled 32 hours by train to address the World Economic Forum in Davos, Switzerland – and she is currently travelling to New York on a zero-carbon yacht to attend a UN climate conference.

Greta doesn’t have much patience for people who tell her she should be in school instead of striking. "What is the point of learning facts when the most important facts given by the finest scientists are ignored by our politicians?" she asks

Seventeen-year-old Doha Khan is the state coordinator of the South Australian branch of School Strike 4 Climate. She joined the movement in November 2018 because she was frustrated about the lack of action being taken to halt climate change.

“We had just seen Adani saying it was going ahead, and politicians weren’t taking a stand in favour of climate action,” she says. “I felt like our futures were being ignored.” As a coordinator, Doha is responsible for strike logistics, recruitment and organising meetings. It’s a gruelling schedule on top of studying, with the work cutting into her leisure time. Doha is also frustrated by elements of the media who say that the movement is adult-led.

“When people make those criticisms, it’s pretty clear that they have made no effort to engage with the students involved in the movement. Because it would quickly become clear that’s a myth. A massive group of students organise every single thing that this movement does.” Despite the criticism, the student activists remain determined to get leaders to listen. “We are in a climate crisis, and the inaction of all the stakeholders – from lawmakers and leaders to businesses and investors – is going to have a tangible impact on my generation,” Doha says. “I don’t think my generation will forget those who want to sell out our future for short-term profit.”

For Doha, the reward of being a climate activist and leader is giving students a platform to express their very real concerns. “Young people are so often excluded from political conversations,” she says. “But knowing that I helped organise something that gave a voice to – and empowered – so many young people is the highlight.”

The urgent need to act now

Scientists are clear that the threat of climate change is very real and its impacts will be particularly devastating for Greta and the rest of her generation. But it’s not just this generation who are calling for immediate action. Australia’s financial leaders are also telling policymakers, businesses and financial institutions it’s time to start addressing climate change. In early 2019 RBA deputy governor Guy Debelle warned about the damaging impact climate change will have on the economy. The sooner policymakers act, Guy said, the lower the costs will be. In May APRA’s Geoff Summerhayes warned companies and super funds they must address climate-related risks, many of which are “foreseeable, material and actionable now.”

Greta is now calling upon adults to join students around the world in a general strike against climate inaction on Friday 20 September 2019. The calls for immediate and drastic action on climate change that began with Greta’s solitary strike are becoming impossible to ignore.