Don’t get depressed – get active! 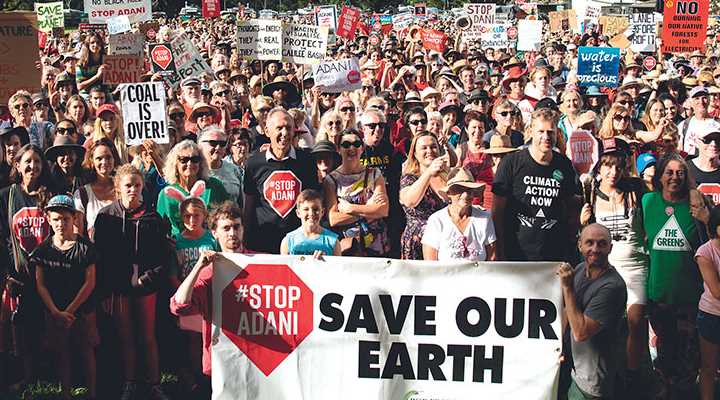 Faced with the enormous scale of the climate crisis, it’s tempting to wonder how much difference one person can make. For lifelong environmental activist Bob Brown, the answer is: a lot!

Bob Brown is not your typical retiree. Following his decision to leave federal politics in 2012, the former Tasmanian Senator and leader of the Australian Greens set up the Bob Brown Foundation. Since then, the foundation has fought a number of environmental campaigns with a focus on the logging, woodchipping and burning of Tasmania’s native forests. Most recently, the foundation has been working to protect the Takayna (or Tarkine) rainforest in Tasmania’s northwest from logging and mining. Australian Ethical was proud to support the 2019 Takayna Ultramarathon which raised over $100,000 for the foundation.

In the lead-up to the 2019 federal election the former Senator led a convoy of vehicles from Hobart to the Galilee Basin in Queensland to protest Adani’s Carmichael coal mine. We spoke to Bob as the convoy was passing through the Queensland town of Gympie.

“One of the questions I always get is ‘why Adani?’ Well, I was asked the same question 37 years ago,” says Bob, referring to the successful campaign to stop the damming of Tasmania’s Franklin River in the early 1980s. Thanks to the intervention of the late Bob Hawke – who Bob calls “the environmental prime minister of Australia” – the Franklin continues to run free.

That shows that sometimes it makes sense to focus your energies on one-of-a-kind projects, he says. Not only will Adani be the “biggest hole in the ground in Australia”, but it will pave the way for five more coal mines. One of those extra coal mines will be owned by Clive Palmer, whose $60 million advertising campaign in the lead-up to the 2019 federal election amounted to a “wicked corruption of democracy”, according to Bob.

The climate emergency is here now

Bob doesn’t mince his words when it comes to the dire situation the planet is facing from global warming.

“It’s immoral to keep burning coal when we know what we are doing to the future of the planet. We’re in a climate emergency. And Adani stacks up as an absolutely absurd way to proceed when we have such good alternatives in renewable energy.”

It’s even more absurd, he says, when you consider that in the past year more greenhouse gas was emitted than ever before. The reality of climate change is best reflected in the rising insurance premiums people are paying due to floods in places like Townsville, says Bob – along with the increasing incidence of bushfires, droughts, storms and sea-level rises.

“These things are not something of the future – we’re in it. The conservative estimates are that 150,000 people died from global warming around the world in the past 12 months and that’s just going to escalate.” It’s a bleak picture, but Bob is realistic about the crisis facing the planet.

We don’t know what the future holds, but we do know it’s in our hands. We do know we have to wrest the decision-making away from the coal miners and oil drillers and gas frackers. That’s for certain.

The next generation of activists

If there is hope to be found in the fight against climate change it lies in the next generation, says Bob. He tells a beautiful story about a six-year-old girl called Evie he met at the Stop Adani rally in Sydney who handed him some pictures she and her classmates had drawn of the Great Barrier Reef.

“Evie has done this off her own bat, she is not traumatised. In fact, it’s the opposite. She said to me: ‘Mr Brown, could you take these drawings to Mr Adani and save the Great Barrier Reef and all the fish and the turtles and the koalas?’”

Anthony Houston, Evie’s grandfather, says some people might say it’s “not right” to expose kids as young as Evie to something as frightening as the destruction of the Great Barrier Reef. “She told me she knows the reef is in trouble because the water is too warm and we all have to try and help save it,” says Anthony.

Bob says young people like Evie have a right to be upset. “I think they’re angry about it,” he says, referring to the millions of children around the world who have been inspired by Swedish 16-year-old Greta Thunberg to walk out of school to protest government inaction on climate change. “I haven’t seen this since that first wave of environmentalism in the ‘60s and ‘70s swept the world,” he says.

It’s not a fashion or a fad or a passing phase. We're into a period of rebellion by thoughtful people against this materialist-based greed and the ‘God of Growth’ which is a prescription for enormous human heartache and cruelty in the future – let alone the extinction of our fellow creatures.

Bob admits he worries about the despair among people who are anxious about the climate crisis.

“Bertrand Russell said the problem with the world is that the stupid are cocksure and the intelligent are full of self-doubt. My answer to that is: get over it, intelligent folk! We can’t have a future that’s given over to chaos and enormous, soul-searching regret that despite all the evidence we kept burning coal,” he says.

Bob talks about his own battle with ‘doing something’ and getting the Adani convoy underway. “In considering this convoy, I said to [my partner] Paul: What are we doing? This is such a huge undertaking. But I’m so glad we did it, because the worst thing you can do is think ‘It’s all too hard, I won’t do anything, I’ll just sit and feel glum’.”

“I’m not much of a fan of that,” he says – something of an understatement. “That’s why our foundation’s motto is: ‘Don’t get depressed, get active!”